Glenn Gilbert Groff (1916-2012) and Nina Margaret Groff (1916-2000) moved from their native Iowa to California in 1953 and settled in the Sacramento area. Glenn found work as a correctional officer at Folsom State Prison (and was in the security detail at Johnny Cash's famous concert). In the 1960s, they began a life-long interest in photography and local history. On weekends they explored rural California, shooting 35mm slides of railroads, covered bridges, lighthouses and local industries.

Following the 1964 Christmas floods, Glenn made it his mission to photograph all the surviving covered bridges in Oregon. He and Nina made many trips into rural Oregon over the next 15 years, using Kramer Adams' Covered Bridges of the West (Howell-North, 1963) and the 1963 and 1965 State Highway Commission covered bridge maps as their guide. They also hunted covered bridges in Iowa and Indiana. Nina dabbled in freelance journalism and sold several feature articles to local newspapers on unusual industries seen on these trips, including San Francisco Bay salt evaporators, inclined railways at hydro-electric plants, and hop-drying kilns. Following their passing, Glenn and Nina's enormous slide collection was donated to museums and libraries in California and Oregon.

This collection includes a variety of 35mm slides capturing covered bridges throughout Oregon. Also included are a few photographs of lighthouses, historic sites, ships, bridges, and local industries throughout Oregon, Washington, and California. 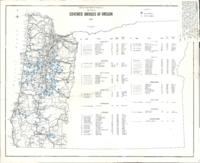